Roger Dubuis Spider with Real Pirelli’s Tire on It 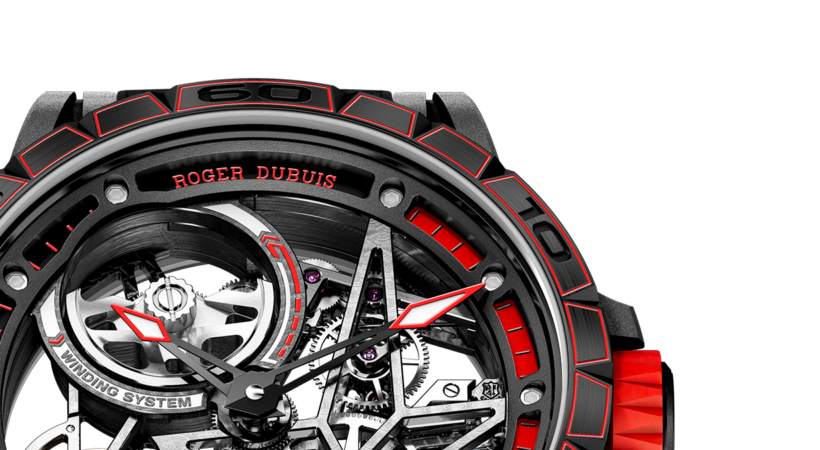 Roger Dubuis began its partnership with exclusive tire supplier to auto racing’s Formula One championship, Pirelli. The collaboration with Italian tire maker is as part of the Geneva-based brand’s new emphasis on unconventional materials and motorsport-inspired design. This watch is dubbed as Excalibur Spider Pirelli.

These models come in two colours, yellow and red in which the primary colours in Pirelli’s iconic logo. The special note on this model is on the strap, both red and yellow versions come with a strap that is made from rubber from actual Pirelli tire rubber on the exterior and softer rubber enhanced with a Pirelli tire tread pattern on the interior.

Let’s talk about the details of this special strap. The interior part that touches the skin is crafted of comfortable, durable, and anti-allergenic rubber that is used on most high-end watch straps that are adorned by a pattern taken from Pirelli’s F1 tires. Meanwhile, on the exterior part of the straps inlay features rubber that is taken from Pirelli tires of Formula-1 Grand Prix winning cars. The different approach where a fancy yet unique material is melted into the case or some other part of the watch.

Like any other Roger Dubuis Spider series, the case is made of black DLC titanium measuring 45 mm in diameter. The self-wound Roger Dubuis Caliber RD820SQ movement has been skeletonized on this model. In addition to the Pirelli-inspired aesthetics, the watches retain the familiar Excalibur look round, with a fluted bezel and crown, triple lugs, and Dauphine hands sweeping over the open-worked dial.

The Caliber RD820SQ incorporates the “star” motif that also serves as hour pointers due to the brand’s familiar motif.

When you talk about racing cars, everything is high-tech, mechanical, noisy and colourful, and this is what Roger Dubuis Excalibur Spider Pirelli is. Produced in just 88 pieces in each of the colourways (yellow and red) that Pirelli uses on its Formula-1 tires, there will only be a very limited number of these pieces made.

This is just so good to see how far Roger Dubuis has gone to alter the overall looks and finer details of the Excaliber Spider to match this high octane lifestyle.